Stefan Zweig and his Chess Story The Royal Game

back to Stefan Zweig in German 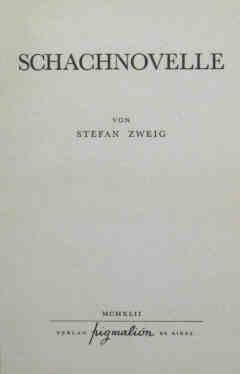 Here you'll find the names and their biographies to Stefan Zweig's last telephone address book, where you can read the full text in a PDF-document:
Stefan Zweig his address book 1940-1942.PDF

Since October 2013 the Chess Story by Stefan Zweig is now available in an illustrated miniature book published by Miniaturbuchverlag Leipzig. It's the first edition in this mini book size 38 x 53 mm with 378 pages. The miniature book contains illustrations after woodcuts by the German artist Elke Rehder. The illustrated cover is made of white Cabra-leather . The precious book is kept safe in a nice slipcase. ISBN 978-3-86184-253-8. 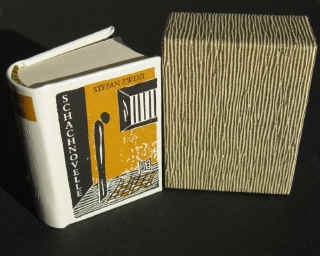 Schachnovelle 2013 in memoriam of Stefan Zweig. Hand-signed Woodcut against isolation and solitary confinement and torture

Hand colored woodcut in black and yellow to the chess story by Stefan Zweig. The illustration is reflecting the isolation of Dr. B.  in the solitary confinement, the play against himself and the splitting of his mind divides him into a Black Me and a White Me. The woodcut is a reminder of the death of Stefan Zweig on 23 February 1942 in his exile in Brazil. Image size 22,7 x 11,7 cm on sheet size 31 x 20 cm. 2013. Limited edition of 100 numbered,  signed and titled copies. 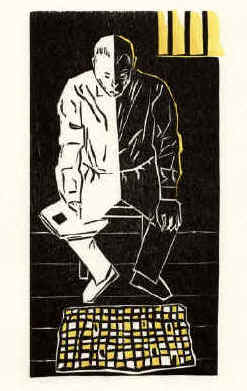 Schachnovelle 2013 - chess story The Royal Game in memoriam of Stefan Zweig. A hand colored woodcut against isolation and solitary confinement and torture by the artist Elke Rehder.

Special offer at Büchergilde Gallery in Frankfurt. It is one of the acknowledged Online-Galleries in Germany Link to Büchergilde-Gallery 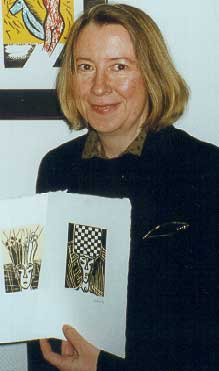 2013 - From 13 July to 17 August there was the 3rd Open Air festival in Pontevès in Provence in France with a theatrical poster to the chess story Le Joueur d'echecs by Stefan Zweig, directed by Bernard Damien. The main roles: Raffaele Giuliani and Tanghi Burlion. Bernard Damien is the artistic director of the Theatre du Grand XL Midi in Brussels. The premiere was held in Brussels in February 2012. The posters for the show in Brussels and for the festival in the Provence show a woodcut by the German artist Elke Rehder. 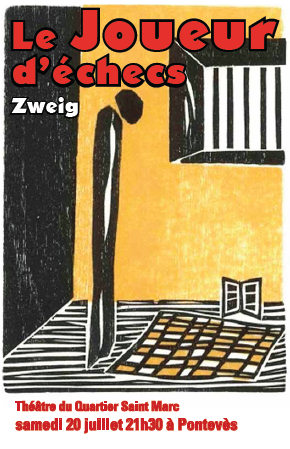 2013 - World premiere of the Schachnovelle by the Spanish composer Cristóbal Halffter at the Kiel Opera House.  Link to more information and pictures in a PDF-file 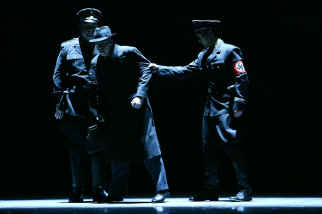 Brazilian video about the chess story by Stefan Zweig

2012 - in November the Brazilian short film The Royal Game - Zweig's last checkmate was produced by telenews in Rio de Janeiro and directed by Leonardo Dourado.
Alberto Dines talks with Flávio Tavares about Stefan Zweig's final years in Petrópolis and the novella The Royal Game.  Link to the short film and more information in a PDF-file 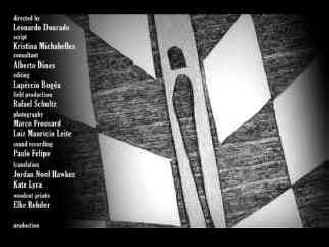 2012 - in August an image of my painting Irrational Position was used for a theatre poster. Die Schachnovelle is the name of the play.
The stage version for the theatre show in Berlin was written by Helmut Peschina. 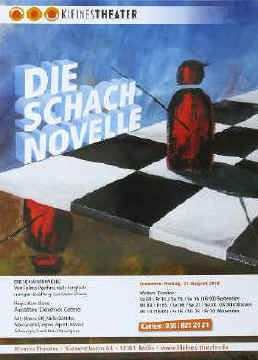 Signed theatre poster to the chess story. Poster from August 2012. Kleines Theater in Berlin shows the play Die Schachnovelle by Helmut Peschina after the chess story The Royal Game by Stefan Zweig. Poster after the oil painting Irrational Position by the artist Elke Rehder. Poster signed by the artist.

Cover illustration by Elke Rehder for the German edition by the publisher S. Fischer

2012 - in May the German publishing house S. Fischer Verlag in Frankfurt used for the publication of Schachnovelle one of my woodcuts for the cover design. 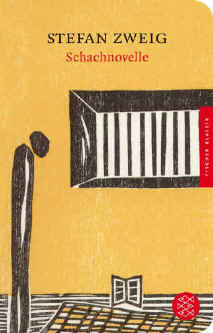 German edition of the chess story by Stefan Zweig 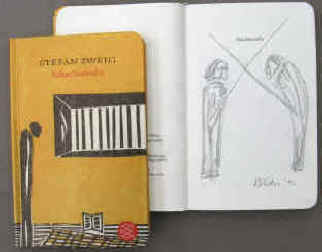 Schachnovelle - book with an original pencil drawing signed by the artist

2009 - The six woodcuts to the chess story The Royal Game by Stefan Zweig were printed in offset by a German chess magazine. 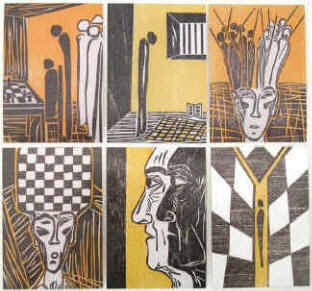 2009 - the exhibition Landesweit (nationwide) with new acquisitions of the country's historical collection of 25 years was shown in the city of Kiel. The portfolio with the six woodcuts for The Royal Game is shown on a double page in the exhibition catalog. 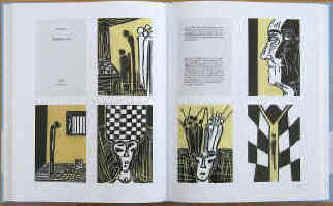 2007 - the woodcut Schachwut (chess rage) was published by the Elke Rehder Presse with a quotation from the novella in original letterpress printing. The woodcut to the chess story The Royal Game by Stefan Zweig  is showing Dr. B. playing chess against himself. 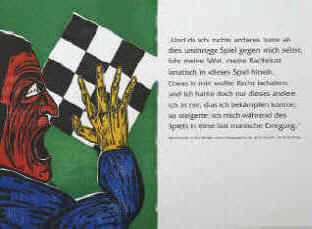 And here is my translation: "And as I had nothing else than this nonsensical game against myself, my rage, my lust for revenge drove fanatically into this game. Something in me wanted to be right after all, and I only had this other ego in myself that I could fight; so I improved during the game in an almost manic excitement."

Color woodcut with a quotation from the Schachnovelle (chess story The Royal Game) by Stefan Zweig, showing the situation while Dr. B. is playing chess against himself during the cruel nothingness in his solitary confinement. Letterpress printing on Lana  paper. Size: 21 x 29,6 cm. 2007. Limited edition of 100 numbered and signed copies in the Elke Rehder Presse and 360 signed copies for the Edition Curt Visel.

2006 - an image of one of my woodcuts to The Royal Game was selected for the art exhibition poster at the Gottfried Wilhelm Leibniz Library in Hanover. 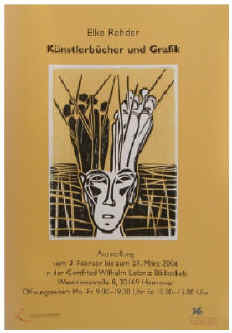 Elke Rehder - Artists' Books and Prints - 2006, Gottfried Wilhelm Leibniz Library in Hanover. The poster shows one of the woodcuts to the chess story The Royal Game by Stefan Zweig. Poster signed by the artist.

2004 - Ulrike Erber-Bader dedicated the bibliophile book Schachnovelle with six woodcuts to the members at the annual meeting of the Society of Bibliophiles in Frankfurt. 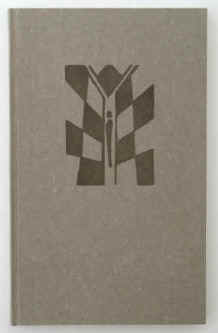 2002 - to the 60th death anniversary of Stefan Zweig I showed at the Literaturhaus (house of literature) in the city of Kiel my new art works on chess and Henning Westphal read from the book Schachnovelle by Stefan Zweig. On this occasion a double page with a woodcut and a hand-set text (a short quotation from The Royal Game) was published in letterpress printing by my small press Elke Rehder Presse. 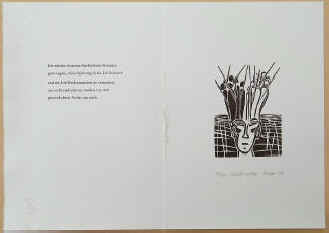 Quote from the original German Schachnovelle by Stefan Zweig: "Ich war durch meine fürchterliche Situation gezwungen, diese Spaltung in ein Ich Schwarz und ein Ich Weiß zumindest zu versuchen, um nicht erdrückt zu werden von dem grauenhaften Nichts um mich." And here is my translation: "My terrible situation was forcing me at least to try this splitting into a Black Ego and a White Ego in order not to be crushed by the atrocious nothingness around me."

The woodcut is showing Dr. B.  trying to split his mind into a Black Me and White Me and playing chess against himself. Quotation from Schachnovelle in German language, handset letterpress printing with a woodcut in black and white. Handbound in softcover wrapper. 19,5 x 27 cm. 2002. 50 numbered and signed copies.

1996 - I published a portfolio with six woodcuts to the evolution of Dr. B. in The Royal Game by Stefan Zweig. Some copies of my portfolio are held in libraries, for example in the special collection of the National library of the Netherlands. This chess collection is based on the collections of Antonius van der Linde, Meindert Niemeijer and G. L. Gortmans. One copy can also be found in the chess collection of the Schleswig-Holstein State Library in Kiel. 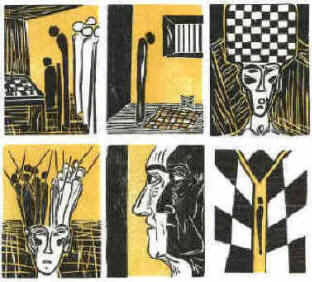 1990 - I created my first art works to the chess story by Stefan Zweig. I started with sketches and drawings to the psychological conflict of the main character Dr. B.,  who begins to play the game against himself. Stefan Zweig describes this conflict with the term chess poisoning which can lead to a chess fever. One year later I visualized the psychological conflict of Dr. B. in my oil painting Irrational Position. In 1992 I showed this painting together with other large-scale oil paintings and art installations at the gallery Buschgraben in Berlin. At the opening of exhibition the actor Till Hagen read from the book The Royal Game by Stefan Zweig.

International alternative spellings of the name